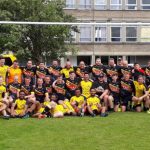 On Saturday gone, the Edinburgh Eagles produced a dominant display against a spirited Durham Tigers in the last home game of the regular season. The Eagles however still face a tough trip to fourth-placed West View Warriors this coming weekend, where avoiding defeat will see the reigning Scottish champions secure second place in their debut NERL season and, more importantly, a home tie in the first round of the play-offs.

A strong crowd, buoyed by thirty-something Tigers’ fans, enjoyed an entertaining game played in ideal conditions. Despite the dominance of the home side, who went ahead through a Mikey Mair in the opening minutes, the Tigers players never took a backwards step all game and gave their all right up to the final whistle.

The Eagles forwards laid the platform with big carries, hard hits and, in the case of Mair, more tries as the hosts scored raced in to a 26-0…..a Mair brace plus one a piece for Matt Hart, Lucas Reid and Kaharau Kaihe plus three Matt Hogg goals. The Tigers steadied the ship and got themselves on the board with a converted try before Mair completed his hat-trick and Hogg added his fourth goal just before half time….32-6 at the break.

The second half was much the same as the first with the Eagles forwards doing the hard work and the backs scoring the points as a brace of tries from Hart completed his hat-trick, plus there was a double from Ross Marwick and one each from Vili Cikaitoga, Lennox Baselala, who had Cikaitoga to thank for giving him the easiest try he’ll ever score. Not wanting to let the big lads down, forwards Terry Logan crossed the whitewash and Kaihe added his second try of the game. Hogg added another two goals, and when he left the field, Kiwi Kaihe knocked over four goals.

The visitors joined the second half points party with another two tries of their own plus one successful conversion to give a final score of 76-16 in favour of Edinburgh Eagles.

Everyone at Edinburgh Eagles would like wish a speedy recovery to our own Craig Quigley who sustained a season-ending wrist injury, plus an equally quick recovery to Durham Tigers player Stuart Hann who unfortunately faces a spell on the sidelines having suffered a broken thumb.

A huge congratulations goes to our under 16’s who played their first ever game of rugby league on Sunday at Strathmore Silverbacks and ran out convincing 50-22 winners. The names Necani Racava and Kini Ravuravunisali will go down in Eagles history as the scorers of the first ever try and goal respectively at junior level.