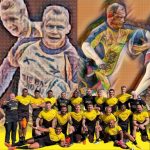 Mark Robertson has been appointed Captain of the Edinburgh Eagles for their Scottish Cup final showdown against Forth Valley Vikings on Saturday 23rd July 2022 at 2pm in Glasgow.

Robertson who has been a stalwart of the club for the last 13 years makes his final appearance before hanging up his boots to focus on Coaching. He made his debut back in 2009 against the Fife Lions and today marks his 50th appearance for the club, scoring 35 tries and he will be looking to add to that tally in his final game.

The Eagles who go into today’s game as favourites have played down the tag and know that there is a job to do and will be professional in their approach with not only the Scottish Cup up for grabs but also the prestigious place in the Betfred Challenge Cup as the Scottish representative in 2023.

The Eagles squad to face the Vikings is: