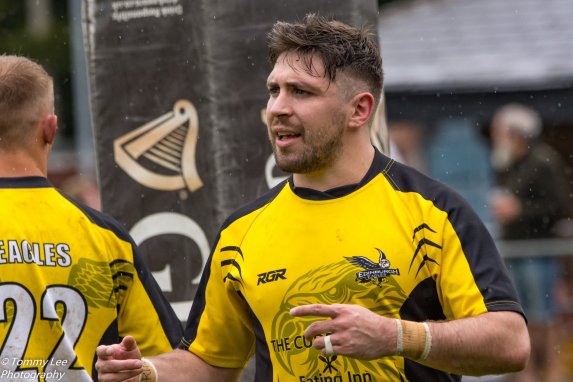 Saturday saw Edinburgh Eagles face their namesakes Wallsend at Royal High, in the first round of the North East Cup. The game was a repeat of last years final which saw the Eagles from south of the border take home the trophy after a hard fought 36-28 win so, the Scottish Eagles were out for revenge, particularly given Wallsend’s forfeiture in the league the previous week.

The fact that it was a first round clash was probably a disappointment for both clubs and some neutrals given how closely contested the final was but as the saying goes “that’s the luck of the draw”, and no doubt there’ll be some parties glad the two met so early on in the competition.

Unfortunately the sunshine of last year’s game had gone awol and the constant drizzle of Scottish springtime meant that neither side could demonstrate their attacking abilities in a game which remained an error-strewn arm wrestle from start to finish.

The visitors made the best use of the conditions early on and raced into a 0-10 lead with two tries and one goal, before Edinburgh player-coach Craig Robertson got his first of the game in his first appearance of the season. The same player bagged his second short-range four pointer shortly before half time but, with the hosts leaving their kicking boots at home, they remained two points down at the break, 8-10.

The second period started brighter for Edinburgh, although not for the weather, as Vili Cikaitoga grabbed his first try for the club. The conversion attempt was missed but the home side lead for the first time in the game.This lead was extended to six points when Robertson scored his hat trick try, but yet again the kick was missed so the score remained 16-10.

Wallsend hit back with a try of their own in the corner, narrowly missing the conversion to bring them back within two points. Then, in what seemed to be a miscalculation of the score line, the reigning champions knocked over a drop goal to leave Edinburgh 16-15 up.

With Edinburgh holding on resolutely, the second forty seemed never ending and in the dying minutes, a quick play the ball saw Wallsend slice through a tired, retreating home defence to score next to the posts and the second successful conversion of the day gave the visiting team a 16-21 victory in another evenly matched contest between the two Eagles.