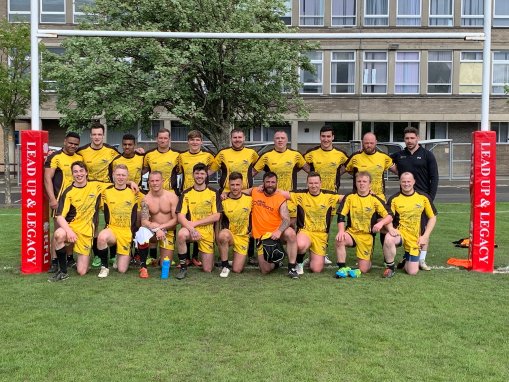 With more than 25 registered players unavailable for one reason or another, Edinburgh Eagles were a little short of numbers for the weekend’s trip to Catterick. Two late withdrawals meant that the team travelled with only 15, five short of a full match day squad, for the first away game of the season. Debuts were handed to Scotland under 19 players Mason Cullen and Matty Ferguson.

The rain during the warm-up gave way to sunshine but the heavy downpour resulted in difficult conditions and a number of handling errors due to the slippery ball in the early exchanges. On thirteen minutes it was the Eagles who broke the deadlock with Craig Quigley getting his second try in as many games. Following a penalty, the ball was moved wide to the Edinburgh left finding Quigley who powered over despite the attention of two defenders. George Nixon added the extras to make it 0-6.

It was a tight first half which saw both sets of forwards trying to set the platform for their respective backs and it seemed only a matter of time before the home side scored, getting over the try line three times only to be thwarted on each occasion by the visitors last ditch defending. And it was another Eagles forward, the returning Terry Skeet, who was next on the score sheet. The big prop charged over in typical fashion from close range to put Edinburgh 0-10 up. The score remained that way at half time.

The second half started brightly for the visitors when Jonny Quinn got over the whitewash for a try, goaled by Lewis Clarke, but Catterick replied almost immediately to make it 6-16. Coach Craig Robertson has instilled the importance of fitness in to his convocation this season and it showed as the Eagles next hit a bit of a purple patch with tries from Clarke twice and Mikey Mair plus two Clarke goals which gave a comfortable 6-32 lead.

The hosts never gave in and had the final say with a deserved converted try in the closing stages after the Eagles misjudged a kick in to the in-goal area, giving a final score of Catterick Crusaders 12-32 Edinburgh Eagles.